MDR: From challenge for developers to a smooth path from prototype to patient

With the advent of the MDR (Medical Device Regulation), developers of medical devices face new challenges. The legislation creates more administrative burden for universities and hospitals, among others, and the implementation of the MDR still raises many questions. A group of scientists from Medical Delta (TU Delft, Erasmus MC and LUMC), together with various national bodies, is working towards a nationally supported policy and clear agreements on the MDR.

As the law has many implications for Medical Delta scientists and developers, this article provides an overview of the current state of implementation of the MDR.

The legislation around medical devices changed on May 26 2021. The Medical Device Directive (MDD) lapsed and the MDR (Regulation (EU)2017/745) must now be acted upon. Both the MDD and the MDR focus on the development, manufacturing and application of safe medical devices. In many cases, for example, clinical investigations are required to prove the efficacy of a device and strict requirements are set for market authorisation. Within the MDR, these requirements go one step further than before. In addition, the definition of 'medical device' has been broadened, bringing things like AI and apps earlier within the definition, and therefore under the legislation.

Specifically, this means for scientists that they already have obligations regarding the MDR from the early development stages. Scientists must meet the conditions for clinical research from the MDR (Art. 82) before the Medical Ethics Review Committee (MERC; METC in Dutch) can grant approval for clinical trials with patients. This implies that they must demonstrate that a product is safe and effective. For this, in many cases, a developer must have safety tests performed by qualified personnel and with calibrated equipment, all components (including packaging materials) must be traceable, and a risk-benefit assessment must be done by independent product/technical/medical experts.

Experts do not always prove easy to find in practice, especially if the system is very specific or unique, such as in terms of bio-compatibility, choice of materials, or a specific patient group. Also, standardised protocols are not yet available to everyone.

Developments for in-house use

Medical Delta launched a pilot in 2021 to identify bottlenecks in the preparation of the Investigational Medical Device Dossier (IMDD). The IMDD is part of the MERC documentation to be drawn up when applying a (medical) device within clinical research. On the basis of three case studies, a perception of the process and documentation steps that a developer must go through before applying for MERC approval has emerged.

One of the development projects serving as an IMDD case study is the steerable needle, developed by Ir. Martijn de Vries and Dr. John van den Dobbelsteen (TU Delft). The needle tip can be steered within the patient's body by bending the end of the needle from outside the body. This makes it possible to travel curved paths to, for example, the prostate, bypassing intermediate structures. In this way, the prostate can still be radioactively irradiated very locally without surgical intervention.

Because the instrument fits into the existing 'workflow' and is very effective, the developers are convinced that the steerable needle can add value in the clinic. After optimising the design, they conducted tests in the lab and phantom experiments with end users. "Then we decided to go for the highest achievable: positioning the steerable needles in patients," says De Vries.

If I had known in advance that we would be moving towards clinical testing, I would have kept a logbook throughout the development process to properly document the process steps and choices made from the start.

As the MDR has been in force since last year, compliance with the MDR is a prerequisite to start testing clinically (i.e. in patients). To this end, all steps in the process have carefully been documented.

In addition, specific requirements exist regarding development and manufacturing processes. For example, in the case of the steerable needle, the needles being produced must be cut to the correct length and slots must be made to make it steerable. To ensure that all risks are known and documented, both processes must be done with calibrated devices in accordance with international standards and by people who should be designated as experts. As these processes are not yet standardised, this creates extra work for both the developer and the implementer (e.g. a commercial company).

"If I had known in advance that we would be moving towards clinical testing, I would have kept a logbook throughout the development process to properly document the process steps and choices made from the start," says De Vries.

TU Delft's steerable needle is just one example. Erasmus MC is experiencing a similar process to develop an intravascular imaging system. The system, developed by prof. dr. Gijs van Soest and Medical Delta Professor prof. dr. Ton van der Steen (Erasmus MC, TU Delft), is promising for the treatment of narrowed coronary arteries. The system uses intravascular ultrasound, which reveals the structure of the blood vessel, combined with intravascular photo-acoustics, which sends pulses of light, thus imaging the composition of the blood vessel. This allows for much sharper localisation of cholesterol and other fats, and better placement of stents. The intravascular imaging system consists of a catheter less than a millimeter in diameter, which is flexible and can map the blood vessel from the inside. Moreover, to control the system and analyse the results, software is being developed.

Therefore, for the intravascular imaging system, both hardware and software must comply with the MDR.

As a researcher, you hope you don't have to fill in and work out all the forms and documents yourself, but if there is one thing I would like to pass on: you’ll have to.As the intravascular imaging system is being developed within a healthcare institution and will initially be used within Erasmus MC, the first phase of development falls under 'in-house manufactured'. As described in Art. 5.5, the system must then comply with the limited set of rules instead of the full MDR. The implementation of this set of rules is up to the healthcare institutions themselves. Erasmus MC has set up a ‘suitable (‘passend’ in Dutch) quality management system’ for this purpose (derived from ISO 13485).

"As a researcher, you hope you don't have to fill in and work out all the forms and documents yourself, but if there is one thing I would like to pass on: you’ll have to," says Van Soest.

In addition to the Medical Delta pilot, a position paper was written in 4TU context (the umbrella body of technical universities in the Netherlands). The 4TU position paper suggests, among other things, setting up a quality management system in which templates and guidelines are embedded. Such a system would be set up electronically and thus provide guidance to both developers and METCs for proper implementation of the MDR. Before the Central Committee on Human Research (CCMO) approves this approach, they want to be able to test the above-mentioned quality management system using existing cases. Four cases are submitted from different research institutes for this purpose. The first case, the steerable needle, will be submitted soon.

In addition, the Dutch Federation of University Medical Centres (NFU) started a programme in 2019 for the purpose of implementing the MDR in the UMCs. The aim of the initiatives of both 4TU and NFU is to ensure a uniform interpretation for knowledge and care institutions regarding the MDR, such that implementation becomes easier.

From the moment the quality management system and associated templates are approved and thus the preconditions are in place, further implementation is important. Supporting and guiding developers in complying with the MDR, and certainly also the PhD students and postdocs involved who will have to deal with this, is crucial. In this regard, it is not desirable for everyone to reinvent the wheel themselves. Therefore, developers should be able to take courses or classes on how to comply with the MDR.

In order to set up the aforementioned processes within Medical Delta, and to detect any bottlenecks in time, coordination meetings between TU Delft (John van de Dobbelsteen and Jean Marc ter Riet), LUMC (Susanne van Engelen) and Erasmus MC (Kelly van der Geest) continue to take place. Locally, support for researchers with MDR issues is already in place within several institutions. Erasmus MC, for example, has set up the MedTech Innovation Support Office (miso@erasmusmc.nl), and LUMC researchers can contact the Techno-infopoint (techno-infopoint@lumc.nl). TU Delft is currently setting up such a contact point.

Despite the challenges surrounding the MDR, important steps have already been taken from within Medical Delta. With the proposed documents and support, developers such as universities and hospitals will be partly relieved and guided. The aim is to eventually turn the challenges posed by the MDR into a smooth journey from prototype to patient, ultimately leading to future-proof care.

More information about the MDR? In recent months, the NFU has held webinars explaining various topics regarding the MDR. These are in Dutch and can be watched here. 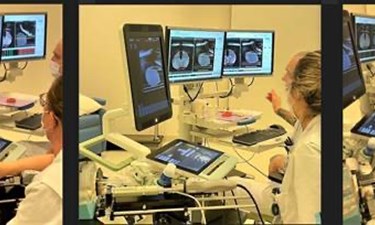