Today, nine professors were simultaneously inaugurated as 'Medical Delta professor' at Leiden University, LUMC, TU Delft, Erasmus University and/or Erasmus MC. With an appointment at at least two of these five academic institutions, they combine technology and healthcare in their professorship.

The nine professors have each earned their spurs in research at the intersection of health and technology. Examples include the use of new techniques to determine the cause of cardiac arrhythmia, how cartilage can be repaired using technology, and how e-health can help with rehabilitation or prevention of illness. Today's official inauguration follows their earlier appointment as Medical Delta professors. During the inauguration, the professors presented their research and answered questions from young researchers.

Click here for an overview of the nine Medical Delta professors and their field of research (in Dutch).

Sustainability of quality of healthcare system

The sustainability of the healthcare system is under pressure, concluded the Scientific Council for Government Policy in a recently published report (in Dutch). Dutch people use ever more, and more expensive healthcare. If this trend continues, in forty years' time healthcare will cost almost three times as much as today. And to be able to continue to provide this care, one in three people will have to work in healthcare, compared to one in seven today.

"Technological solutions can remove part of the burden of healthcare and improve the quality of care," says Professor Frank Willem Jansen, Chairman of Medical Delta. "But this can only be done when there is good cooperation between scientific disciplines, and between research and healthcare practice. The nine Medical Delta professors who were officially installed today, show that this is feasible. Whether it concerns prevention, making the right diagnosis at an earlier stage, combating common diseases such as arthritis or cancer, or improving the general health of the population - technology can play an important role if the doctor and engineer understand each other well and work closely together." 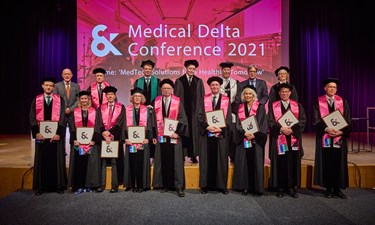 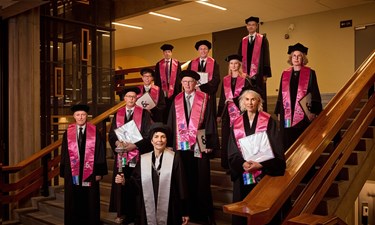