Smart data use is already helping medical research considerably. Yet this is just the beginning: with more patient data it is not only possible to determine much more precisely which people have an increased risk of diseases and disorders such as dementia, but the causes can also be determined much better. The question is whether and, if so, how patients want to share their health data. And which analyzes we entrust to machines instead of to doctors.

This was the subject of a discussion at the Medical Delta Café that took place on Thursday 21 November in the atmospheric Rijksmuseum Boerhaave in Leiden and was led by moderator Lea Bouwmeester.

Prof. Dr. Wiro Niessen, Medical Delta professor and Scientific Lead of the Medical Delta Diagnostics 3.0: Dementia and stroke program, explained how much his research can benefit from smart data use. “There are huge opportunities to use big data for the healthcare of tomorrow. A shift is taking place. Where there used to be a picture or pattern once in a while, we now can already establish direct relationships between large amounts of data and relevant clinical outcomes, for example when determining certain types of tumors and the likelihood that treatment will catch on. Big data will increasingly personalize medicine. "

According to Niessen, it is possible to create a ‘learning’ care system in which all data from patients can be used for a better diagnosis or treatment of new patients. “That requires a system in which we make data accessible in a responsible manner and set up good cooperation between data scientists and clinicians. You need clinicians to properly interpret the data. "

Do we want to know everything?

Not only clinicians, but also ethicists see their work changing due to big data applications. “New technologies in healthcare also lead to new ethical issues. This has given ethicists a practical task. Technology has saved the ethicist, for which thanks!” Prof. Martine de Vries, ethicist at LUMC stated.

People are naturally a little afraid of new technology, De Vries said. “The feeling is that people stand apart from technology. I think we can be more nuanced about that: it's not just scary. People have wanted to improve themselves for centuries, technology is part of that. As a society, we must think carefully about how we deal with technology, so that we can continue with it. In addition, we must look carefully at how we handle data: algorithms can give a bias. Data is not yet information. And data is certainly not a patient. You have to interpret it well, a translation by a medic is required.” De Vries distinguished between the complexity of conducting research, such as linking data, and patient's consent. Only the latter is an issue, the first is a technical bump that can be solved.

“The question we also have to ask ourselves is whether we want to know everything. For example, it turns out that many people with Huntington's disease prefer not to know this in advance, but want to live carefree the first forty years before the disease usually manifests itself. That is something to realize well. In technological development, direct input from ethicists, lawyers and citizens is important from the start. ”

Dutch patients are willing to share their personal medical data for research. This is apparent from a survey conducted by the Dutch Patients' Federation. Director Dianda Veldman shared some conclusions of the survey. The Dutch Patients’ Federation applauds this, but with a few comments.

"We are moving from closed systems to exchanging medical data," Veldman said. “That is very important, because it prevents things from being missed or research being done twice. Most patients think it is a good development. "

It is important that data protection must be properly safeguarded, says Veldman. “Careful handling of the data is extremely important. If that does not happen, people quickly lose faith. There must also be reciprocity, for example in the form of providing insight into the results. It is still too much a one-way street: the patient gives data, but then does not see what it yields. Finally, the transfer of personal data should never be made compulsory: always take the group that does not want it into account. ”

Veldman suggested that it should be better possible to offer options. “Give patients better opportunities to indicate themselves to which authorities and which investigations they want to transfer their data. This requires good agreements between scientists, hospitals and patient organizations. Let's speed up that process. "

The concluding panel discussion also provided insights. It was suggested from the room to introduce a "yes, unless" system for releasing medical data. The speakers and the audience agreed that data abuse, for example by large companies that keep data for themselves and create a ‘data monopoly’, should be prevented. Niessen: “With regard to big data, that is one of the biggest concerns. At the same time, hospitals also need companies for the development of new technologies. We need to move towards a system of innovation communities in which hospitals, researchers and companies can use data from patients who have given their consent for medical purposes. ”

Lea Bouwmeester closed the discussion with a wrap-up, in which Gertine van der Vliet, director of Medical Delta indicated that the Delta region is well suited for setting up an infrastructure to facilitate the exchange of data for medical research. "Research from Erasmus University shows that this region is excellent in terms of knowledge and size to address this issue." She also emphasized the importance of reciprocity: "If our researchers use patient data, we are required to communicate as much as possible about Results." 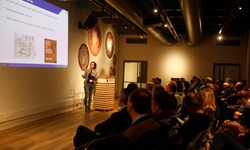 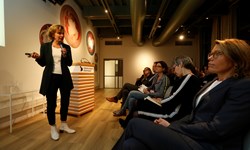 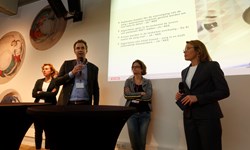 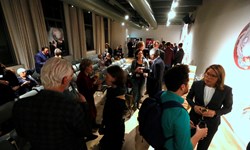