In 2020, a group of students from TU Delft will take part in the four-yearly Cybathlon in Switzerland. With the support of Medical Delta and other organizations, they worked on an exoskeleton full-time for a whole year as part of ‘Project MARCH’. Next week, Project MARCH will present the newest version of the exoskeleton during a ‘mini-Cybathlon’ in Switzerland. Sjaan Quirijns is the pilot of the skeleton. We talked to her about her expectations and how the exoskeleton came into being.

Can you tell us what makes this exoskeleton different to what we’ve seen before?

Basically you can stand, walk and sit with an exoskeleton. With this exoskeleton, you can also walk up and down stairs, which is more difficult, stand up from a lower position and take sideways steps. The skeleton can also take smaller and bigger steps.

How do you operate it?

I operate it with one hand using a joystick to select actions from a small screen, such as standing, walking and sitting. It takes a bit of getting used to, but the strength of the suit is that in the end you can do everything yourself – no one else is involved, but it takes a lot of training to get this far.

What opportunities does it bring you?

The exoskeleton isn’t meant to be used at home. I did have one at home for two weeks – a stripped-down version of this one. But if I needed to go to the kitchen for a cup of coffee, I first had to put the whole suit on, so I just did it in my wheelchair. This sort of suit provides more value on the health side, during rehabilitation for instance. And when you’ve been sitting in a wheelchair for a long time, it’s good to stand up and move regularly; that way your organs get more room, the pressure on your bones and joints is decreased and it’s better for your skin.

This isn’t the first time you’ve worked on the development of a skeleton as a user. How did that come about?

In 2017, there was a study being done with an exoskeleton at the Sint Maartenskliniek in Nijmegen. A friend of mine was taking part, and I thought it was a great project. There was first a test to make sure you were suitable – you had to be fit and a certain size, for example. But you also had to be able to make certain movements with your joints, so you wouldn’t just break something when standing or walking. I met all the criteria and trained with that skeleton three times a week for eight weeks. After six weeks, I took it home with me for two weeks.I’ve seen people actually crying at the presentation when they see that it works – then winning isn’t the most important thing anymore

Yes, you could say that. The Sint Maartenskliniek maintains close ties with TU Delft, so when the team of students needed a pilot last year, they asked if I was interested. I wanted to get involved, because as a user I had all sorts of ideas. And I also found it interesting from a social perspective. It’s a group of students who are putting their studies and everything around them on hold to develop an exoskeleton, in their own time and on a voluntary basis. The competition is the cherry on top, but the great thing is that fades into the background during the project.

Why does that happen?

Because they can see that it works. The Dreamhall at TU Delft is a sort of workshop where all sorts of smart people are developing things. The Solarteam is one example of the groups working there. The students work on their project for 40 hours a week; they’re motivated, and they think it’s fantastic to do. They work very well together, because they really want input from the pilot to make it as good as possible. I’ve seen people actually crying at the presentation when they see that it works – then winning isn’t the most important thing anymore.

And what is it like for you? How is it to be able to walk?

I’ve been in a wheelchair for 19 years, so I’m pretty used to it. The first time I wore the skeleton, I thought: “Oh, this is possible, what else is?!” It squeaks and creaks and people stand around you to make sure you don’t fall. But it felt really natural, a bit like it did before my accident.

What does this project mean for the future?

Exoskeletons aren’t suitable for everyone, and they are extremely expensive to develop. That’s why it’s so great that a team of students want to do this in collaboration with the end users – that way you can develop it even further. If you notice something doesn’t work, you can adjust it. For example, if the skeleton is putting pressure on my ankles and giving me sore spots, I won’t feel that because of my paralysis, so we have to keep an eye on it together. I have now tested three skeletons, and it’s great to see how you can improve them together. The suit that’s competing in the Cybathlon has really been built for me, so it’s not suitable for another user. What it shows is what will be possible if the development is continued. 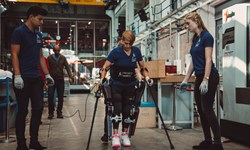 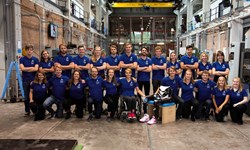 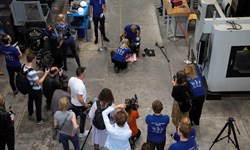 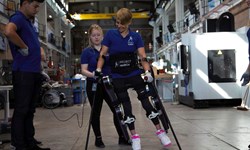